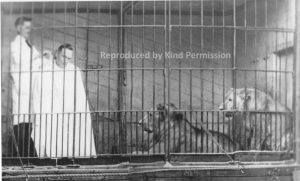 At least that is what I imagine the headlines in the local newspaper would have looked like if ever this photograph was published. Sent to me by the owner, apparently it shows the local barber known as Billy Weedon shaving the head the landlord of the George Hotel (Mr George Gay) in one of Bostock and Wombwell’s lion cages with two lions on the loose in the cage. The owner has kindly given permission for the publication on the blog. The date is said to be 5th July 1930 and must represent one of the last travelling menageries before they folded just two years later. Malmesbury is in Wiltshire, England.

If anyone wants further information I can pass your details to the owner of the photograph.