During the early part of the twentieth century, Frank Bostock returned to England from New York and toured his Bostock’s Jungle.  It visited several large cities and  Earl’s Court, another of those large exhibition sites in London. It had also operated for 7 months in Sheffield, South Yorkshire during 1910.

Here is one of the many postcards produced to advertise the shows: 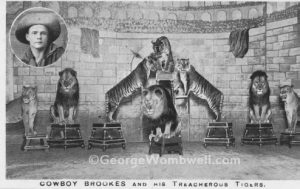 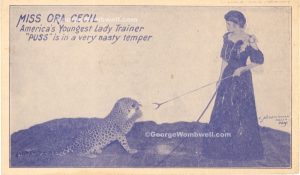 “…little cats are nicer than the big ones I think, but more treacherous and have to be handled each in his or her own way. They are playful at times and like to be petted, but you never can be sure whether they will hurt you or not.

One funny thing about them though, is that once they have been trained by a woman, they will not work for a man.”

Ora Cecil appeared for Frank Bostock at both Coney Island and Atlanta city.

There has been a rise in the interest of lion taming recently and the research website will be publishing a series of articles on lion training in history. Added today a new article (in PDF format) concerning Montarno from Bostock and Wombwell’s Menagerie.