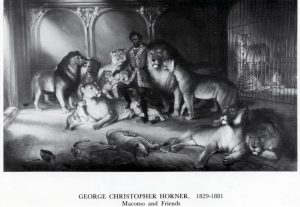 This is probably the closest we will get to knowing how Martini Macomo[Maccomo] (1835 or 1836–1871), the Lion King appeared to his audience. He has been described in the Dictionary of National Biography as being born in Angola (1861 Census aged 25 residing in Bath), although Frost suggests he was a sailor. Others suggest he may have been one Arthur Williams from the Caribbean. This representation was painted by George Christopher Horner (1829 – 1881), an accomplished Victorian animal painter as Macomo and friends. Current whereabouts unknown.