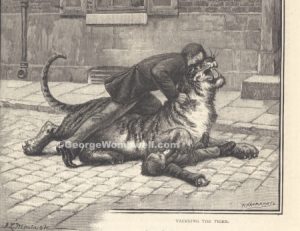 Charles Jamrach (1815 – 1891) was the leading dealer and his emporium was situated in what was then known as Ratcliff Highway in east London — at the time the largest such shop in the world. From the description the building can be placed on the 1868 Edward Weller map of London near to the Tobacco Dock somewhere along St George’s Road (to the right of North Quay).
Jamrach was born in Germany. His father, Johann Gottlieb Jamrach, waschief of the Hamburg river police, whose contacts with sailors enabled him to build up a trade as a dealer in birds and wild animals, establishing branches in Antwerp and London. George Wombwell is thought to have started in a similar fashion having made acquaintances with many sea captains coming into the London docks earlier in the century.
Charles Jamrach moved to London and took over that branch of the business after his father’s death in circa 1840. He became a leading importer with agents in other major British ports, including Liverpool, Southampton and Plymouth. As indicated in the article, his business included a shop and a museum named Jamrach’s Animal Emporium and it is thought Jamrach also had a menagerie in Betts Street in the East End and a warehouse in Old Gravel Lane, Southwark, in South London.