Well I knew nothing of this till today! Thanks to a reader, I have found a Pathe News item on the subject. It was known as Barry’s Sensational Motodrome

Whilst concerning ourselves with Hippodrome theatres, this book caught my eye a few weeks ago. Published in 2005, it covers the years 1905 – 1985 and provides a history of the building and the variety acts that ‘trod the boards’ during that period. I of course, am interested in the early years when it was owned by E H Bostock the Menagerist. Indeed, it was even built by him in double quick time.

Ipswich already had a Hippodrome of sorts, a temporary wooden structure on the Woodbridge Road that contained a circus ring and therefore a potential rival for Bostock’s main business. He received information that the current Hippodrome was to be rebuilt which provided Bostock with some urgency for a completely new theatre. He chose Frank Matcham the well known theatre architect, of London Coliseum and London Hippodrome fame, to provide the plans. These plans were submitted for planning permission on the 19th September 1904. One month later and the foundation stone had been laid in St Nicholas Street, Ipswich after several houses had been pulled down to make way for the new theatre. E H Bostock was not going to hang around waiting obviously! It was opened during 1905, long before the rival theatre and became known as the Ipswich Hippodrome.
The book is a good read, but is quite scarce. It may be available via Amazon on occasions at:

This photograph now in the collection, recently came to light. It came from Lancashire, but could be any of the Hippodromes around the country. E H Bostock built and bought several Hippodromes between the years 1900 – 1918 including Norwich, Ipswich and Glasgow. It does not seem to be any of those though, unless it is the second of the two theatres that were known as the Hippodrome in Norwich. It may also be a group of people that visited from a company, etc., although I seem to have seen the man on the far left, middle row before now. Arthur Feeley the elephant handler, maybe? Some of the others appear familiar too, but the fashion of sporting a ‘tash‘ around that time does not assist recognition!

If you recognize anyone or the Hippodrome please do get in touch. It is a high resolution photograph. Click the photograph to zoom in. Good luck! 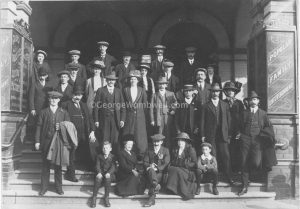 PS: If anyone recognizes the toffee tin being held up, centre back row, then let me know that too!