UPDATE: The whereabouts of this building has now been solved. It was part of the Franco-British Exhibition at White City in London during 1908. It’s architecture fits with the rest of the site, which went on to hold the Olympic Games and is on the same location  where the former BBC Centre still stands. A diary belonging to Kate Frye describes a visit to the Zoo back in 1914. By this date the site had become the Anglo-American Exhibition, which was cut short due to the outbreak of war.

Then John and I by tube to the White City and there we strolled about. I was dead tired and had the rat horribly until we had some dinner when I revived a bit but felt anything but lively and walked about in rather a dead fashion. We did not try many side shows and they were failures. Bostocks Zoo – heaps of performing lions but all very sad. We missed most of it as we went there last but we saw the poor dears fed. We also saw some wonderful racing on a miniature motor track, but John was seized with a panic fear so we came out.  Saturday July 11th 1914

There is every reason to believe that Frank Bostock was responsible for its existence during 1914 as he had returned from America and had exhibited his menagerie under the billing ‘Bostock’s Arena’ as in his Coney Island site in New York.

A new addition to the collection gives us a problem as to its location. It is not the Arena in New York’s Coney Island. Nor is it the Arena at Earl’s Court in London. A clue to its whereabouts is in the writing from the sender of the original card:

‘Dear Win this is part of the YMCA It is a big place’,  plus a franked impression marked PADDINGTON.

The other places considered are Glasgow and Sheffield, but it does not have the same architecture of either sites. It is certainly a permanent structure though. 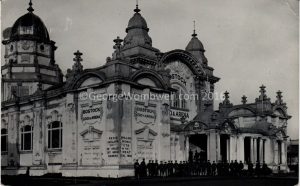 I can see it possibly being in London, but there is no record I have found on its location. It had a full uniformed staff as well. Any information is appreciated including the possible architect, etc.