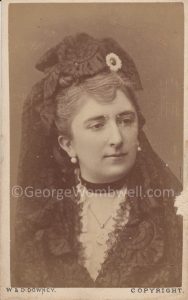 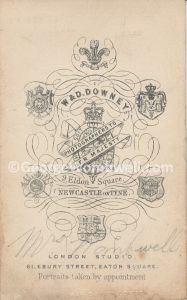 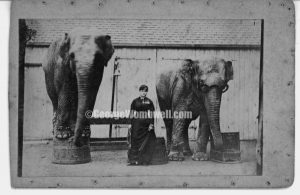 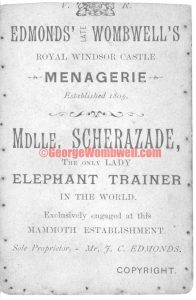 One of the most popular uses that the Victorians made of the new photography technology was the Carte de Visite. Millions of them were produced throughout the world. They are though, rare in the Menageries and Circus world, but Edmunds, the proprietor of Wombwell’s after ‘Mrs’ Wombwell retired, made use of them for his acts. One such act was Mdlle Sherazade and her elephants. Billed as the only Lady Elephant Trainer in Europe, she came, probably from Brussels around 1884. Edmunds was known to have even sold off an elephant already in the menagerie to make way for Sherazade’s two performing elephants. She even married the other animal trainer in the Menagerie and also trained big cats as well. This carte is now in the collection.

A full report will be entered on the research website in due course.